Hello readers! If you are anywhere near the big apple, I hope you are staying inside and warm away from the storm! New York City keeps going despite any weather conditions…right now, one of my clients is rebranding of her online presence, message, and her career. I’m so excited to be a part of it! Days are longer with graphic design, proofings, streaming testing and planning, but the end result is always worth it.

To relax after an intense day, I’ve grown an addiction to Food Network’s Restaurant Impossible. Have you seen it yet? It’s absolutely fascinating, inspiring, eye-opening and a hint of hilarious. Robert Irvine, a successful entrepreneur and chef, steps in and helps failing restaurants figure out what they are doing wrong, give them a whole entire rebranding and gives them hope for success! 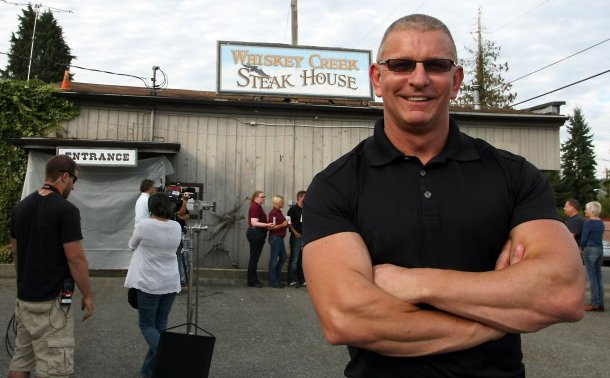 ^Robert Irvine in front of one of many restaurants he’s helped on Restaurant Impossible.

A few episodes in, I saw a parallel in what these restaurants needed to go through in their saving owners from their branding mistakes (or lack of) and what I am working on in my client’s rebranding project. Not as intense, but lessons are to be learned. As different as music and restaurant business may seem, here’s what I learned from *guilty* a marathon of Restaurant Impossible:

Lesson 1. Fresh eyes!
A term commonly used in the restaurant business, a run of fresh eyes always does the business good. In other words, from time to time you want fresh eyes on your overall look, your message and your interactions. As a musician, this is your website layout, your images, your bio, and your press quotes…A lot of things that folks tend to put up once and then forget about.

If you are feeling blah about your site or see your google analytics telling you people are leaving your site in less than 5 seconds – start by asking some friends, family, colleagues, or even better, strangers to look at your site and give them their opinion! People love giving their opinion.

Tip: An easy way to gather opinions is to build a survey and send to your mailing list as well as social media sites. Allow them to look at your site, your photos, choose their favorite press quotes, etc. and get all that great free feedback! However, participating can be swayed with a free song download or answer them any question they have as a fun reward.

Lesson 2. Consider your target.
Quite a bit of these restaurants were attracting older crowds, yet they were wanting to bring in more families and younger customers to bring in life to their dying business. One quick look at the menu by Robert, and it became painstakingly clear – the menu took 20 minutes to read through and even though there was a quantity, this hurt the restaurant as they couldn’t make all those items fresh and tasty and provide quality. Changing their menu to family-friendly meals that kids and parents will love, picking a few specialties and making them great makes sense because it brings in their target customers AND keeps them coming back for more.

See what they did there? They got exclusive. And as much as you want to say ‘I want everyone to listen to my music!’, that ain’t gonna happen. Derek Sivers says it best here:

“…know who you are, and have the confidence that somewhere out there, there’s a little niche of people that would like your kind of music. They may only be 1% of the population. But 1% of the world is 65 million people!

Loudly leave out 99% of the world. When someone in your target 1% hears you excluding the part of the population they already feel alienated from, they’ll be drawn to you.”

Tip: Write down a list of artists you don’t like, or whose fans who would probably not like you. Do the same to whom you do like and whose fans would probably like you. Look at their message, their online presence and find inspiration (or learn what you hate) and learn from them!

Lesson 3. You can’t do it all yourself.
In one episode, the owner had a difficult time letting anyone do their jobs. Losing money, she lost trust in her capable team, resulting in them acting up on the job. Robert took her aside, putting each task on a chain, and asking her one by one – what do you do in this restaurant? One by one, the chains went on her neck, getting heavier and heavier. The physical weight was a metaphor for the weight she was carrying in her job. After she realized she couldn’t do it all on her own and be successful, she took each chain and delegated them to her staff.

This goes the same for you, musicians, working to rebrand yourself. Here’s some common sense that you need to remember – You can’t do it all yourself! You may think you are saving money by designing that business card yourself, researching the perfect venue for your release party and scheduling your rehearsal, but truth is, it’s overwhelming, you’re wasting time, and it’s probably not your forte.

Tip: If you are on a budget, go to elance.com or freelancer.com and post your project around – ask for examples from any applicant you have a good feeling about and let them what they do best, in your budget & on your terms!

So there you go – interesting, right? Next time (or the first time) you tackle a rebranding, take these tips and get a head start!